Saturday, September 18th saw the Walt Disney World Annual Passholder preview of Duffy the Disney Bear and his move from Japan’s Tokyo Disney Sea to our very own Epcot World Showcase. Duffy is getting some mixed reviews among die-hard EPCOT Center fans that would rather see money spent on new or improved attractions. Call me a sentimental girl, but I for one am excited for Duffy’s arrival and supportive of the treatment he’s getting as he get introduced to the rest of Walt Disney World.

I look at it this way – as a young girl visiting EPCOT in the early 1980’s, if Figment was given the same love and attention that Duffy is receiving now, I’d have been as happy as, well, a little girl. This is not just some random bit of merchandise being promoted without any research or follow-through. Duffy has experienced great success among Japanese Disney fans and while I don’t anticipate he’ll be quite as popular here, I can appreciate that he has a “history” and is not just going to show up on store shelves. If you don’t like Duffy, there is no reason you have to partake in Duffy madness, but for those with a softspot for cute and cuddly characters, he is a welcome friend.

As ZannaLand reported earlier last week, Duffy merchandise will be plentiful in World Showcase. Here are the Duffy Fast Facts, as discovered Saturday:

Duffy will have two exclusive Meet & Greets state-side – in Disney California Adventure and at Walt Disney World in Epcot only.

Duffy’s Meet & Greet gazebo is being constructed right now outside of the former Odyssey restaurant’s waterfront area, across from the Disney Traders gift shop.

Meet & Greets will begin October 14, 2010 which is also when Disney Traders will be re-opened as “Everything Duffy”. The new nautical themed decor will house all things Duffy related, including the 17″ and the special 28″  “Fluffy Duffy”. 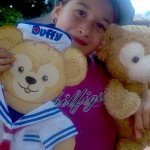 “Everything Duffy” will be receiving the entire line of Duffy merchandise from Tokyo Disney Sea as well as exclusives only available here in World Showcase. These will include, as reported last week, a costume for each country in World Showcase as well as special celebration costumes.

Other Duffy food items will be available including the Duffy crispy treats Passholders enjoyed on Saturday. Kids menu placemats will now have a Duffy theme and activities and there will be a Duffy chocolate cake dessert item for them as well.

World Showcase Kidcot stop masks will become Duffy masks and children can still decorate them as they like and receive a stamp in each country. 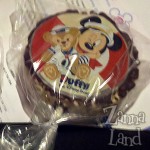 To commemorate Duffy’s first year in Epcot, exclusive “I Just Hugged Duffy!” stickers will be available this first year only – to help share the Duffy love to all you see.

As in Japan, special Duffy photo spots will be built where Duffy can be placed on a platform as you pose for pictures around the countries of World Showcase.

Duffy will also be getting his very own official Facebook page (we’ll bring you the address as soon as it’s available!), his own float in the Walt Disney World Christmas Parade and his very own Duffy cartoon, shown on the in-room resort tv’s at all Disney resort hotels.

Future Duffy merchandise will include a Limited Edition Duffy ear hat, Duffy pin sets, and a first-of-its-kind 3-D bear-mold Vinylmation – flocked with fuzzy Duffy fur! These will appear in March of 2011.

Duffy merchandise will also be available on the Disney Cruise Line ships as we reported here, but as for now, no official Duffy Meet & Greets on the ships are announced. Perhaps in the future…

Epcot will be home to the Duffy flagship store but select Duffy costumes will be available in other Walt Disney World merchandise locations, including Downtown Disney.

Other Duffy events, experiences and items are in the works, including hopefully once Duffy is settled in and happy, Shellie Mae coming to live here too. For now Shellie Mae and the Duffy live show will stay in Japan until Duffy gets a little more well-known here in the States.

In case you were wondering – Duffy is officially  6 years old and his favorite foods are apples and bananas!

Thanks to Walt Disney World’s Manager of Synergy and Special Events, Dara Trujillo and Walt Disney World Show Director Forrest Bahruth for the wonderful Duffy presentation on Saturday. It was great fun meeting Duffy, my whole family loved him and we can’t wait for October 14th. Kawai!