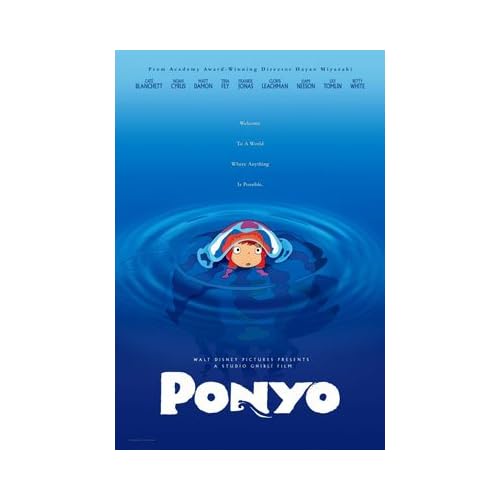 Ponyo, which means something soft and jiggly, is the latest work of art released by Studio Ghiblil, directed again by Mr. Miyazaki. Sosuke, the little boy in the movie, gives Ponyo her name when he finds her as a goldfish stuck in a glass jar in the ocean. He decides to keep her and care for her, and she decides she’d really like to become a human girl rather than stay a fish. We had been watching the promos and news about Ponyo for years now as it was worked on and released in Japan, anxiously awaiting its arrival here in the States. After just seeing it now on opening night, I can say without hesitation that it was worth the wait. My daughter’s review: “I loved it! Best movie ever!!” It passed my son’s stringent standards for entertainment as well. The animation was a bit different from previous Studio Ghibli films; much more of a watercolor film – fitting with the water theme. Mr. Miyazaki has always been a steward of nature and environmental themes – before they were trendy – and Ponyo was no exception. When you see the power of the ocean overtaking the human world, that is when you become amazed with the mastery of animation being presented. Breathtaking.

Something I was much more aware of in this film was the Japanese cultural differences. I’m not sure if it was because of the amount of mainstream/Disney Channel promotion done or if I’ve just become so conditioned by what’s “P.C.” and what’s outside the “norm”. For example, the mother in the film (voiced wonderfully by Tina Fey) is portrayed as a pretty crazy driver – speeding, careening around sharp curves and risking her and her son’s lives by trying to outrun a huge ocean swell. At another point, she leaves her son alone in the house while she goes to look after the seniors where she works, because of the flooding and power outages everywhere. In a different scene, Ponyo and the boy Sosuke come across a young family with a baby. Ponyo offers the baby soup, but the mother takes it and drinks it. Ponyo says it’s for the baby, and the mother explains that the baby only drinks milk, but if she drinks the soup the she will make milk for the baby and he can get it that way. Pro-breastfeeding in an animated film?! That is unheard of in Hollywood. I was left thinking in all these instances, “this would never appear in a U.S. animated film.” And isn’t that sad?

That’s one of the reasons Studio Ghibli’s films have been such a welcome part of our home library. They prove by their very nature and success that there does not need to be a princess or damsel in distress, a villain or evil queen, and a clear-cut happy ending for it to be a wonderful family film, full of life lessons. Another breath of fresh air is how well-mannered, polite and respectful the children always are in these films. Of course this is a product of the Japanese culture too, but definitely something I wish would rub off on Hollywood’s productions. It seems to be not only common-place, but expected for kids movies today to contain a never-ending stream of “shut-up’s” “you idiot!’s” and other much worse slang forms of disrespect, where the parents are all ‘stupid’ and the it’s the kids goal to show them that. It’s easy to love a Studio Ghibli film, as a parent. Hayao Miyazaki has ensured that these details and storylines will stay in his films as they are released in America, after being disappointed by the severe cuts made to the American release of Nausicaä of the Valley of Wind. When Merchant Ivory wanted to make those same cuts to Princess Mononoke to “appeal to American audiences” Studio Ghibli sent over a katana sword with the simple words: “No Cuts”. The “no cuts” policy stands today.

I will admit I was kind of late to the Studio Ghibli party. A friend had talked about Totoro in the mid-1990’s (even though it was released in 1988) but I’d never gotten around to actually seeing the film or any of the others from Mr. Miyazaki. We eventually saw Kiki’s Delivery Service, but still didn’t make the connection to look into more of Mr. Miyazaki’s films. Finally, when Spirited Away arrived in theatres in the U.S. my husband and I went to see it. We were both amazed. We didn’t bring our children, who were 2 and 3 at the time, because we just didn’t know what to expect or if they would be frightened by anything. I was just so in awe of the detailed animation and the story itself just drew you in like nothing I’d ever seen. We were officially hooked. 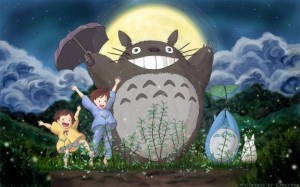 We then looked into collecting and viewing more of Mr. Miyazaki’s works. At that time, there really wasn’t too much available on dvd, since Spirited Away had not yet won the 2003 Academy Award® for Best Animated Feature, and another 35 awards and 19 nominations, which would bring Studio Ghibli and Mr. Miyazaki’s work a little more into the spotlight. What we did find was a Japanese dvd collection from China on ebay containing all the Studio Ghibli productions to date, with English and Chinese subtitles. That is how we introduced our children to the wonders of My Neighbor Totoro.

They were right at the perfect age for that movie; aimed at smaller children with its sweet tale of two sisters moving out to the country with their father, while their mother is sick in a hospital. While out exploring the sisters meet Totoro, the king of the forest according to their father and adventures soon commence with Totoro, smaller totoros and the Cat Bus. It is a heartwarming story that wavers on the edge of that ‘it was only a dream! it wasn’t a dream!’ world that can only exist in the mind of a child. Watching the Japanese version let my children hear the correct pronunciation of Totoro-more like Tote-duh-doe vs. Toe-tor-oh, Satsuki, the older sister’s name as Saht-ski rather than converting it to Sat-SU-kee in the English version, as well as learn the Japanese word for acorn – donguri, which they still use today when we come across acorns. You don’t know how adorable a little 3 and 4 year old are dancing around saying Toteduhdo and donguri as they play Totoro throughout the house.

As we ventured further into Studio Ghibli collection we were able to discuss Japanese culture a bit as well as animation styles, something my husband has always been very passionate about. When he was a cast member at the former Disney MGM Studios (now Disney’s Hollywood Studios) he would take his breaks on the steps of the animation building with his sketch pad in hand, working on his designs. An animator from Special Effects befriended him and told him he had promise, giving him some sample ‘tween’ work to practice with and encouraging him to submit his portfolio for the next hiring of 24 Disney Special Effects Animators. He did, but the number of open positions was then dropped to 10. His portfolio was one of 12 submitted to California but he did not make that final cut. All for the best since he later went into computer networking and programming and went on to author 7 technical books. Anyway, our son, idolizing his father, was very interested in everything his father had to say and the movies served as wonderful bonding time for all of us.

We moved through Castle in the Sky which is one of my favorites animation-wise, and eventually to Princess Mononoke as they got a bit older, which had darker themes and a bit more gore. When Howl’s Moving Castle came out, they were already true fans. Personally, Howl ties with Spirited Away as my favorites, though I still have a major soft spot for Totoro as well. It’s really hard to pick just one favorite because the stories and scenes are just so beautiful.

In any event, Ponyo did not disappoint, and I think for the most part it will appeal to children of all ages and it was a beautiful piece of animation. Of course now that John Lasseter and Disney are involved in the Studio Ghibli releases in America , they have acquired some big name voice actors for the American dub, which in turn means big promotion on The Disney Channel and other outlets across the country. This will no doubt be the most commercial success for Studio Ghibli in the U.S. thus far – thanks to Noah Cyrus and Frankie Jonas. I hope that level of star power creates a whole new generation that discovers the previous amazing works of Hayao Miyazaki, and even inspires some future animators out there, not afraid to break the mold of traditional American animation.