This morning, LEGOLAND Florida Resort has announced that it’s classic events Brick or Treat and Holidays at LEGOLAND are returning later this year. 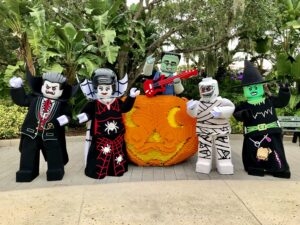 Activities at this event include trick or treating around the park at fun character interactions, life-sized LEGO builds, and meet-and-greet opportunities with seasonal characters. Guests can also enjoy “one-of-a-kind” live shows, and Halloween-themed snacks, all while the park is completely decked out for the event.

See our coverage of previous Brick or Treat events here. 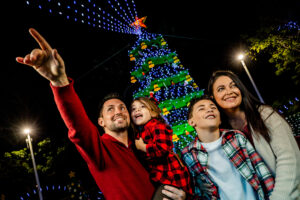 Guests will “dance, sing-along, and deck the halls” with interactive experiences, including a 30-foot tall LEGO tree. Get ready to meet LEGO Santa and create memories with giant holiday-themed LEGO builds.

Our coverage of previous Holidays at LEGOLAND events is available here.

All of the events this holiday season are included with LEGOLAND Florida Resort’s general admission and select annual passes – which can be purchased here.

Stay tuned for more updates from this year’s exciting events!

It’s been far too long since I’ve visited LEGOLAND Florida, one of my favorite parks in central Florida. I love the low-key, relaxing atmosphere and how there is something adorable or surprising at every turn. The park recently announced a new Star Wars area of their Minilands opening in November 2012 and crafted entirely from 1.5 million LEGO bricks. The interactive area will include scenes and characters from the iconic movie series.  The LEGO Star Wars Miniland Cluster will become the eighth interactive area in the park’s Miniland USA, a walk-through, interactive attraction that uses LEGO brick to recreate famous American cities such as Washington DC, New York and San Francisco.

Another reason LEGOLAND Florida is so special is it retained the unique “old Florida” feel of its former resident, Cypress Gardens. I absolutely love seeing the huge trees, waterfalls and other lush landscaping throughout the park. LEGOLAND Florida also keeps the fun going all year long with themed events like the upcoming Brick or Treat Saturdays.

During Brick-or-Treat, presented by Wells Fargo, Miniland USA has been transformed into a fun, haunted scavenger hunt for the whole family with the invasion of LEGO Monster Fighters and their enemies. With extended hours on Saturdays, Miniland USA gets a bit more spooky when the sun goes down and the fog rolls in on these LEGO cities.

This thrilling family event also features trick-or-treating along the brick-or-treat trail, a kids’ four category costume contest with brick-tastic prizes and a build your own Halloween themed LEGO pumpkin model activity station.  Only found at LEGOLAND Florida, families can also check out the world’s largest LEGO Jack-O-Lantern made of 26,500 LEGO bricks and capture a great photo memory.

I know this is something my whole family would love as we always have such a great time, even my 13 year-old, who is technically older than the demographic, loves it there. Will you be heading to LEGOLAND Florida for Brick or Treat? You can find more information on tickets and park hours at LEGOLAND.com