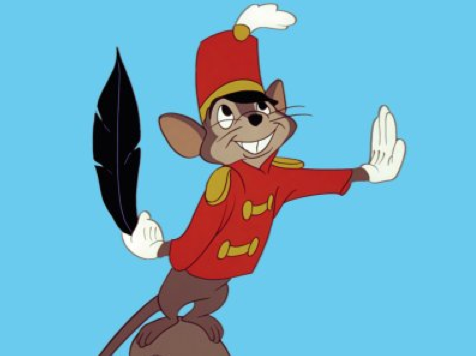 “The very things that held you down, are gonna carry you up and up and up!” ~Timothy Q. Mouse

Dumbo has always held a special place in my heart, I think for its quiet simplicity and life-lessons. Unlike the previous Disney animated films of Snow White and Pinocchio, there were no real “scary” parts for me as a child, so it was therefore a safe movie to see again and again. Of course I wasn’t around when it first premiered in 1941, but I do remember being slightly scared by the evil Queen and the Pleasure Island scenes in Pinocchio and relieved by the lack of those elements in Dumbo. While we did own Dumbo on VHS, it had been quite some time since I’d viewed this classic and I was pleasantly surprised at how much I enjoyed seeing it again.

This 70th Anniversary edition DVD and Blu-ray combo pack are impeccably restored and you’d think the film was just released with its crisp, clean animation. Dumbo is notably one of only two Disney animated feature films to use watercolor backgrounds. Lilo and Stitch animators used some watercolor backgrounds as a nod to this classic style. The result in the film is a beautiful environment that just draws you right in.

Things I never really paid attention to before this viewing of Dumbo are how the elephants are the only animals which speak (aside from Timothy, the Stork and the crows of course). All the other circus animals are much less detailed, letting the audience know that our story lies here, with Mrs. Jumbo and her precious baby and not with other popular animals like lions and tigers. The elephant ladies are given human-like characteristics of being proud and gossipy, and showing emotion in the case of Mrs. Jumbo. What mama doesn’t feel the same sense of pride and need to defend one’s child if attacked? We instantly feel for Dumbo and his mom, knowing they are different than the other, rude and shallow elephants that rely on appearances and worrying ‘what the neighbors will think’. At the same time, we see Dumbo jump right into the action and be ready to pull his weight, help out, and be a part of the circus family.

The circus scenes, and in fact the entire movie, do not feature much in the way of human interaction. The faceless roundabouts setting up the circus tents sing a song as they work, the clowns grouse about wanting more money, and the Ringmaster worries only about entertaining the crowds and making money. This is truly an animal’s tale, but a reflection on all of us as well. The result is a captivating tale for little ones, as my almost-3-year-old has been entranced by it ever since I opened the case. It is rare he’ll sit through an entire film of any sort, animated or otherwise. Dumbo has held his attention and been on repeat for the last 4 days! The dialogue is scarce, and as a result, has much more meaning when it is spoken.

Some history about Dumbo of interest, it was actually produced in the midst of the Disney animator’s strike, which resulted in several strikers receiving caricatured appearances as the clowns, complaining of wanting more money. In addition, Dumbo was created in an attempt to recoup financial losses from Pinocchio and Fantasia, which is why the film is so stark and plain in detail, compared to the first two films. I think this is exactly what makes the film so heartwarming, as you focus more on the characters and Dumbo’s story than on other details. Dumbo does not utter a word, but captures our heart completely. Each song is memorable and singable and the hi-jinx from Sterling Holloway as the Stork leave you smiling.

An exception to this simplicity is, of course, the Pink Elephants on Parade scene, which comes to pass as Dumbo and Timothy accidentally imbibe water laced with Champagne. After viewing this fantastical segment multiple times over the past week, this has become one of my favorite animated sequences ever. I’m no Disney historian, but I think you can definitely feel the Fantasia vibe here, as well as some foreshadowing of the upcoming Three Caballeros South American influence. Truly a unique and masterful spotlight on Disney animation. And Technicolor pachyderms.

Now you’ve made it through the entire review and I didn’t even mention Baby Mine. You didn’t think I’d forget, did you? Of course this heartfelt, tear-inducing song is one of the most tender moments of the film and certainly part of what makes it a classic in every sense of the word. I sung it to all of my babies and it still brings a tear to my eye today. Motherly love at its finest.

Back to Timothy’s quote – the life lessons within Dumbo hold true and are relatable to by every generation since its release. You may not be what society expects you to be, but being yourself and owning your individuality can lead to great success. And despite thinking you have something holding you back, it just might lift you up. Magic feather or no, you truly can fly in life, if you believe in yourself.

So whether you are just a Disney fan picking this up for your collection, or a family looking to entertain your little ones, or a Disneyphile looking for a snapshot into Disney history, this is a must-have for you. There aren’t too many DVD bonus features, but the Blu-ray definitely offers more, so I highly recommend the combo pack for the most options. The Blu-ray has additional animated shorts, art galleries and games in addition to deleted scenes and songs, as well as expanded viewing experience and Cine-explore experience. The DVD also features the deleted scenes, making-of, and some behind-the-scenes featurettes. The deleted scene shows Timothy Mouse’s explanation of why elephants are afraid of mice, saying how millions and millions of years ago in “pre-hysterical times” giant mice 100 times as big as a circus tent roamed the earth, with “tails as long and fat as a sewer pipe”. A fun, if unrealized little scene.

Be sure to check out the Backstage at Disney scenes in the Bonus Features. This showcases the the sound effects created for the black and white Casey Jr. train scene in The Reluctant Dragon

and it is, in a word, amazing. What a treat to see the original voice and sound actors creating movie magic. Did you know Casey Jr. was “voiced” by a woman? You can see the Sonovox technology used to create Casey Jr.’s signature train-whistle style of sound. This also held my littlest guy’s attention, assuring me that he’s got the Disney gene.