The latest installment in Marvel Studios’ Cinematic Universe is another step closer to release. Starting today, BLACK WIDOW is available for pre-order on Disney+, or for advanced purchase at local theaters.

To celebrate, the studio has released another new featurette of the film and a special message from the cast:

Those wanting to see the BLACK WIDOW on the big screen can purchase tickets online through Fandango or wherever tickets are sold.

If you can’t wait to see BLACK WIDOW on Disney+ next month, be sure to check out our other updates from the film. And be sure to stay tuned for our review of it!

Disney’s Marvel Cinematic Universe has taken us into the world of superheroes ever since the 2008 release of HULK. Now, we’ve been everywhere with these characters: from a neighborhood in Queens to the outer reaches of the galaxy. In this new featurette, released today, Marvel Studios celebrates the movies with a special look at the upcoming feature films in Phase 4 of the MCU.

The world may change and evolve, but the one thing that will never change: we’re all part of one big family.

The featurette details the upcoming creations from Marvel Studios, including BLACK WIDOW and SHANG-CHI AND THE LEGEND OF THE TEN RINGS, slated to release this year. The featurette also gives us a quick preview of new films starring our friends Doctor Strange, Thor, and Ant-Man.

If you’re excited about the future of the MCU in Phase 4, be sure to check out BLACK WIDOW when it releases on Disney+ later this year. 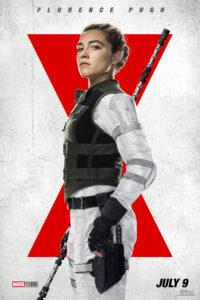 Marvel Studios’ Black Widow is less than two months away, in theaters on May 1! To get you hyped on the upcoming action-packed spy thriller, Marvel has released this brand new final trailer. Check it out below!

In the trailer, Yelena gives more viewers (and Natasha) insight to the mysterious Taskmaster—he controls the Red Room, the program that churns out young women into the most elite assassins. Yelena states the women are manipulated, fully conscious but no choices. Nat hints that during her time, before the Avengers, she had made mistakes and a few enemies.

Nat expresses regret that she should have come back for Yelena. In order to take down Taskmaster, they must go back to where it all began—bringing the fam back together. With Alexei and Melina, their parental figures, Nat and Yelena have a shot in ensuring Taskmaster could never harm young women again.

We look forward to seeing the movie, so be sure to come back here to check out our review when it comes out this summer.

In addition to the trailer, Black Widow also dropped the latest theatrical poster, below:

This is release was originally posted on Marvel.com

Avengers, Assemble! I’ve just now caught up on all the Avengers films leading up to the May 4th release of Marvel’s The Avengers and couldn’t be more excited to see the film tonight at a media screening. I’ll be sure to share my thoughts in an upcoming review, but until then, I have a fun giveaway to share with Zannaland readers!

The good folks at Marvel were nice enough to put together a gift pack containing:

– MARVEL’S THE AVENGERS set of 6 buttons

– MARVEL’S THE AVENGERS one pair of limited edition 3D glasses

Giveaway has ended, thanks to all who entered! Congrats to Jim who was chosen from random.org as our winner!

Good luck and see you in theatres May 4th!