As you know, I discussed my past cake creations earlier and it was within the comments of that entry that the suggestion came in from my good friend Luis to make an Xbox controller cake. I instantly agreed that would be the perfect idea for my Xbox Live-addicted 11 year-old. It also seemed like it could be do-able with some fondant and a little creativity. So last night, I embarked on the journey to create the ultimate Xbox 360 controller cake! (Thank goodness I had the help of my husband or I’d still be working on it now.)

END_OF_DOCUMENT_TOKEN_TO_BE_REPLACED

Actually, I kid. A lot. Charm City Cakes, Buddy from Cake Boss and any other bakers, with or without tv shows, have absolutely NOTHING to worry about. However, I am in need of their creative thinking right now. I’ve sort of built up a reputation of making fun and exciting cakes for the two big kids birthday parties and now that I’ve sent out invitations for my baby’s 11th birthday party (I still remember MY 11th birthday like it was yesterday…how can I have an 11 year-old son?!), I am drawing a blank as to how to compete with prior years’ creations. I took a year off for C’s last party because I was still adjusting to having a baby around and the place we had the party offered ice cream cakes, so it seemed to work. However with S’s last party, I upped the ante with the famous Spaghetti & Meatballs Cake for her Cloudy With a Chance of Meatballs movie party, so I feel it’s only fair I get back on track for C’s party in 2 weeks.

END_OF_DOCUMENT_TOKEN_TO_BE_REPLACED

A little while back my friend wanted to come over and make a Beef Wellington for the first time ever. I’ve seen enough Gordon Ramsay shows to know that dish was a bit too intimidating for me to even attempt. Not wanting to be completely useless, I decided to make us some appetizers using the goat cheese we’d just brought home and some frozen puff pastry shells we had. Now before you think, wow, Zanna has written a whole paragraph and there is no mention of Disney – what gives? Well, I’ll have you know that whenever I think of goat cheese, I think of Tony’s Town Square restaurant in Magic Kingdom, which at one time served a baked goat cheese appetizer and it was divine. So that’s what made me decide to whip this up that night. I posted a picture on Twitter and got many compliments and requests for a recipe, so I thought I’d share.

END_OF_DOCUMENT_TOKEN_TO_BE_REPLACED

Of course there is much more for which I am thankful…and will be listing those things off tomorrow, but for today, I’m thankful for FINALLY making the perfect cheesecake with NO cracks!! 😀 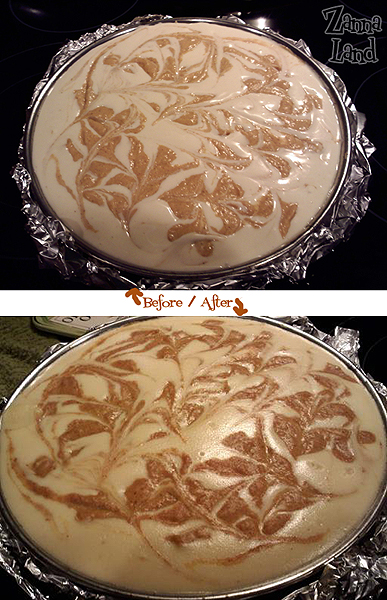 (We’ll see what it looks like sliced tomorrow!! Wish me luck!)

The recipe is Pumpkin Swirl Cheesecake and was the dessert I made when I cooked my first Thanksgiving, 12 years ago! (There were many cracks in it that year!)

And yes, I know this is yet another NON-Wordless Wednesday from me! 😉

When we decided on having our daughter’s 9th birthday party at the movies for a showing of “Cloudy With a Chance of Meatballs” it seemed only right that I’d attempt to make a cake to match – a Spaghetti and Meatballs cake of course!

First, I baked 2 cakes, one 2-layer yellow cake for the base, and a chocolate cake to be crumbled up and turned into ‘meatballs’. Any kind of cake will do, whatever you prefer. The cake balls do not have to be chocolate cake if you are dipping them in chocolate, but if you don’t want to do that step, chocolate cake will look more authentic. Next I made a buttercream frosting for the ‘spaghetti’, topped it with thinned out strawberry preserves for the ‘sauce’ and added ‘grated cheese’ of white chocolate. You can use any recipe you want for the cakes and frosting, whichever you have tried and liked – even box cake!

Once the layer cakes cool, scoop out a little ‘bowl’ shape for the ‘meatballs’ to go in when the cake is frosted. This helps it look more real because real meatballs would sink down into a bowl of spaghetti, not balance on top. A step I missed but would do next time is to also shave down the sides of the cake so it’s more like a hill than a regular cake. That way you don’t have any sharp right angles for the spaghetti to break off on, that happened a lot on my cake.

When mixing the buttercream frosting, I added drops of yellow food coloring and about a tablespoon of cocoa powder to give it real spaghetti color. Just make sure the food coloring and cocoa are fully mixed before you add more, just get it to a color that looks like cooked spaghetti to you. I then lightly frosted the cakes so I didn’t have a ton of brown to cover up with the spaghetti. I also plopped a bit of frosting on the bottom of the pasta bowl I used to hold the cakes, so it wouldn’t slip around. Once that’s done, add the frosting to a pastry bag with a round tip (I used a #3 tip, but would probably go up one size next time) or you can use a plastic bag with the corner cut off. Just keep piping it out in a noodle-like pattern until it looks like a bowl of spaghetti.

Next up are the meatballs! For these I used Bakerella’s famous Cake Balls recipe. I’d never tried them, but friends had and swore by their deliciousness. For these I used an instant cake mix, because that’s what the recipe used and I didn’t want to mess these up. The basic idea is crumbling up the cake into a big bowl, adding a can of frosting, mixing together and forming into balls, chilling, then dipping in melted chocolate and letting harden. Oh my, they are SO good. Now normally I’d take great care in dipping them into the chocolate so they were all pretty like on Bakerella, but since these were meatballs, neatness didn’t count and actually made them look more believable. I just used a pack of chocolate chips, but I would not recommend that again because it wasn’t nearly enough and was really hard to use because it hardened up so quick. My friend said candy melts in the craft store work really well.

Here are the completed meatballs on top of the spaghetti. Just arrange the meatballs however you like. I used a lot, but I knew we’d have a lot of kids at the party and wanted to be sure everyone got a meatball. You can use as few or as many as you want. Just be careful because once you place them, you can’t really move them around, the spaghetti frosting will be crushed. Needs some tomato sauce, yes?

For the sauce, thin out some strawberry preserves with water, heating if needed to stir it up, just be sure to cool it back down before pouring it on the cake, or you’ll melt all that great spaghetti! Of course you don’t have to use sauce at all if you have guests that don’t care for strawberry or other fruit on their cake! I took a risk using it with my kids, but they let it slide this once.

The finishing touch is grating some Parmesan cheese – made out of whit chocolate of course – on top of your creation. This is the final detail that really adds to the look of real spaghetti & meatballs. My daughter really wondered if I’d ruined her cake by adding actual cheese to it!

We got some crazy looks walking into the movie theatre with a giant bowl of spaghetti and meatballs. I told my husband we should’ve announced “We’re here for the Pot Luck!” The person in charge of our party actually said – “what IS that?” I guess curiosity got the better of her wondering why people would bring hot food to a kids birthday party in a movie theatre. Once she found out it was a cake, she thought it was hilarious.

The cake also received the 9-10 year-old seal of approval and they all thought it was the coolest thing ever to be able to eat dinner for dessert. It really wasn’t too hard to make, I’d recommend it to anyone that wants a unique spin on a traditional birthday cake. The reaction is definitely worth it!! Oh! And the movie was really great too – really funny, great 3-D effects. Steve the Monkey (voiced by The NPH) steals the show.