Here’s the latest announcement from the D23 Expo schedule, a special experience for Phineas and Ferb (and Dr. Doofenshmirtz!) Read on below:

Dr. Doofenshmirtz is primed to take over Disney’s D23 Expo…and the Tri-State Area with his most wacky “-inator” yet — “The Waffle-inator” — a spectacular 40-foot high interactive game, combining physical and digital worlds — and simulated waffles — in an epic showdown to free Agent P from the clutches of Dr. Doofenshmirtz.  Kids, tweens and families can hop aboard and wield the life-size invention to play “The Phineas and Ferb Waffle-inator Challenge,” over three days at Disney’s D23 Expo, the ultimate event for Disney fans, at the Anaheim Convention CenterFRIDAY, AUGUST 9–SUNDAY, AUGUST 11.

The Waffle-inator is depicted in “Phineas and Ferb: Mission Marvel,” the highly anticipated event episode of the #1 animated series for kids and tweens, premiering FRIDAY, AUGUST 16 (8:00 p.m., ET/PT) on Disney Channel and SUNDAY, AUGUST 25 (10:00 a.m. ET/PT) on Disney XD.  In the storyline, Phineas and Ferb, team up with the Marvel Super Heroes to help them regain their powers and defeat Marvel Super Villains and Dr. Doofenshmirtz, in an epic battle of good versus evil, where the dastardly delicious device “The Waffle-inator” comes into play.

Popular radio personalities Ernie D, Morgan & Maddy, Jake and Candice from Radio Disney will join in the fun with prizes and activities to entertain Disney fans of all ages.

Tickets to the D23 Expo are available at http://www.D23Expo.com.  Admission includes access to all experiences and entertainment at the D23 Expo, including the Disney Legends Ceremony, and can be purchased for single days or for the full three days of festivities. Admission is $47 for a one-day adult ticket and $37 for children 3-12. Three-day passes are $136 for adults and $106 for children. Members of D23: The Official Disney Fan Club will receive a discount for up to four admissions, as well as early entry to each day of the D23 Expo for themselves and their guests.

If you are looking to find some cute and more affordable Disney merchandise, Target is always a great idea! Right now they have come out with a really nice juniors sleepwear collection featuring Disney characters like Ariel and Tinker Bell!

You can find the collection both in stores and online. The sizes run from junior XS-XL.

Target also have some exciting new merchandise being released for spring!

Disney Consumer Products celebrates springtime with a line of products, featured below, including books and eBooks with your favorite characters, such as Minnie Mouse, Mater, and Phineas and Ferb; swimwear from Disney Store for boys and girls, perfect for spring break; and fun and flirty clothes and accessories by D-Signed Stylediaries found exclusively at Target.

The 20th annual Epcot International Flower & Garden Festival has really outdone itself this year with the addition of dining and drinking options at 12 booths around the World Showcase. In addition, there are some special nighttime effects for many of the topiaries, making the Festival a must-visit, day and night. I was so enchanted by a few of these displays, I had to create a special post to share the photos I took at night. I hope you enjoy the gallery of nighttime magic at the Flower and Garden Festival!

Click to enter a slideshow of the images below:

Which display is your favorite at night? Mine is definitely Tinker Bell and Periwinkle – the fairy music playing in the background is the perfect touch!

Make sure you see our other posts on the Epcot International Flower and Garden Festival!

“When celebrating life’s more important events our users want design that reflects the personal interest of the guest of honor,” said Hans Woolley, president of Evite. “Spoonful.com is committed to providing the tools and content that will enrich family experiences, which is a perfect match for Evite’s ongoing mission of helping people get together and celebrate life’s most special moments.”

Designs featured in the Evite Disney Collection will include Disney Princess, Disney Fairies, Cars, Toy Story, Phineas and Ferb, Alice in Wonderland®, Mickey and Minnie®, Jake and the Never Land Pirates®, Pooh®, Tangled®, Brave®, Shake it Up®, and Doc McStuffins.® 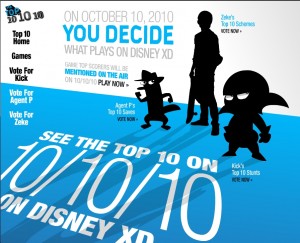 On October 10th – (10/10/10), Disney XD will be airing a viewer-picked marathon of top ten favorites from “Phineas and Ferb,” “Kick Buttowski – Suburban Darevevil” and “Zeke and Luther“. The marathon will air from 8am – 11pm and kids (and adults!)  can vote now on Disney XD’s site for their favorite video clips. Options include Agent P’s Top 10 Saves for “Phineas and Ferb,” Top 10 Stunts for “Kick Buttowski – Suburban Daredevil” and Top 10 Funniest Schemes for “Zeke and Luther.”

In addition to video clips from each episode, (which I could sit and watch from 8am-11pm anyway – love Phineas & Ferb!)  kids can have ‘tens of fun’ with 10 different games from the hit series. The top scores from each game will be featured on-air during the marathon. Head over to Disney XD to watch, play and vote now, then enjoy the results on 10/10/10!