I’m embarrassed to say I’d never really sat through an entire Candlelight Processional until last year at Walt Disney World Moms Panel training. We’d walked  by before but I’d never thought I or the kids could sit through the whole thing (read: yes, I thought it’d be boring). After being moved to tears last year, it is now among the must-do events of the holiday season at Walt Disney World. I actually thought before seeing the entire performance, that it was all stuffy old hymns and one looong narration of the Christmas story. That couldn’t be further from the truth. The show starts out with a toe-tapping song Shout For Joy and immediately you are filled with spirit and ready to join in! The narration then flows throughout the subsequent songs, weaving the Christmas story in words and music. It is truly beautiful and as I mentioned, moves me to tears.

Here’s a video of some images, songs and narration by Corbin Bernsen, I hope you enjoy it and add the Candlelight Processional to your must-do holiday events too!

Without a doubt, the amazing Osborne Family Spectacle of Dancing Lights is one of my favorite parts of the holiday season at Walt Disney World. It’s a family tradition and I can’t tell you how many pictures I have of my kids in strollers looking up with their mouths hanging open at the awe inspiring lights before them. This year, I captured the lighting ceremony, the snow and more on video to share here with you. I hope you enjoy it and get a chance to check them out in person at Disney’s Hollywood Studios if you haven’t yet!

I have to admit, I am guilty of never having sought out or listened to the DHS “house band” Mulch Sweat n’ Shears. I had no idea what I was missing! During Disney’s Holiday Showcase last month, we were lucky enough to attend a dinner served right inside the stage area of Lights, Motors, Action! and treated to a holiday performance by Mulch Sweat n’ Shears. Their Jack Black-like front man delighted my tweens and entertained the whole crowd. Both older kids proclaimed them their new favorite band. I hope you enjoy their version of the Paul McCartney favorite “Wonderful Christmastime” as they performed it.

Be sure to check out Mulch Sweat n’ Shears next time you’re in Disney’s Hollywood Studios. I can’t wait to hear their regular set after the holidays too!

The infamous TRON light cycle literally breaks through Disney.com’s homepage, in awe-inspiring fashion, revealing all new exclusive videos, games, downloads and more. To prepare for the highly anticipated film, fans can go to Disney.com’s “TRON: Legacy” site to get the inside scoop on all things TRON with exclusive videos featuring Olivia Wilde and Garrett Hedlund. And with the new “TRON: Legacy” Digital Painter on Disney.com’s Create, fans can create their own digital universe, complete with their favorite light cycle. 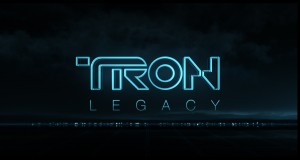 Pirates and Mermaids and Zombies, Oh MY! In PIRATES OF THE CARIBBEAN: ON STRANGER TIDES, Captain Jack Sparrow (Johnny Depp) finds himself on an unexpected journey to the fabled Fountain of Youth when a woman from his past (Penelope Cruz) forces him aboard the Queen Anne’s Revenge, the ship of the formidable pirate Blackbeard (Ian McShane). I’m a huge Ian McShane fan, from the Deadwood days, so I’m hoping his presence will make up for the lack of Orlando Bloom and Keira Knightly…what do you think? 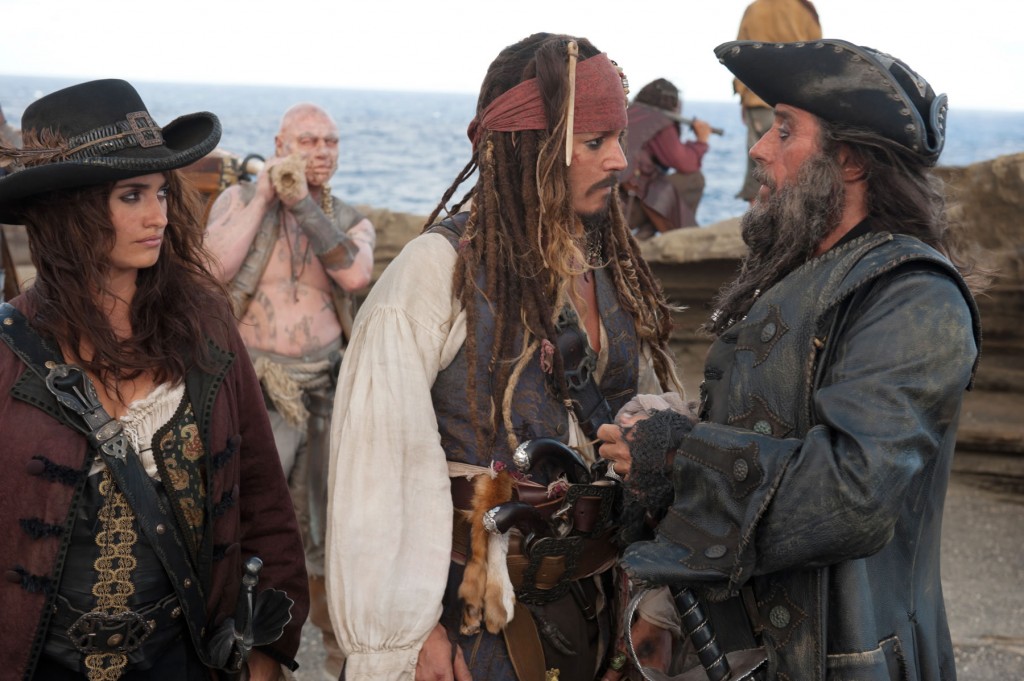 END_OF_DOCUMENT_TOKEN_TO_BE_REPLACED

Rayovac, the official battery of Disney Parks has just kicked off an amazing sweepstakes on their facebook page. Simply enter on Rayovac’s official sweepstakes page and you have a chance to win a $500 Disney Store shopping spree.

Not only that, but when you enter, you can list a friend who will also win a $500 shopping spree if you win! You can enter daily now through December 22, 2010. Here are the official rules. 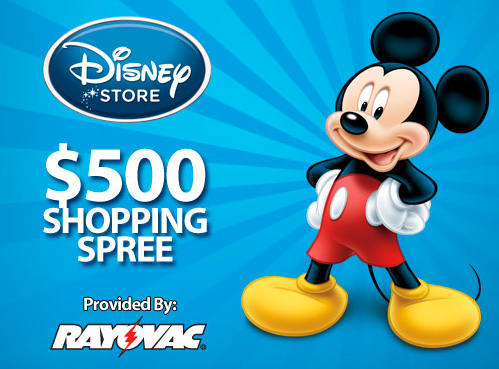 Enter now!  Be sure to use the “share” on facebook option after you enter so your friends  can enter too – maybe they’ll enter you as a friend!

Day 5 has a arrived and I thought, what better way to end this week-long guide to Disney-giving than a giveaway for you? Well how about TWO giveaways??

Thanks to generous and friend on twitter who wishes to remain anonymous, I have a great stocking stuffer to give away. Phineas & Ferb: Ride Again for Nintendo DS! My family loved playing this game and now you have a chance to win a brand new copy for your family.

In addition, the wonderful folks over at Rayovac (the official battery of Walt Disney World!) have sent me some fabulous products to share with you all. Included in this gift-pack will be a Rayovac pre-charged regargable battery charger including 4 batteries, a separate pack of 4 re-chargeable AAA batteries, a medium sized LED flashlight with batteries, a small LED flashlight (in pink!) with batteries, a 4-pack of AA batteries in a “Go Pack” (perfect for taking with you to Disney parks!) and a 2-pack of D batteries. I think this should help out anyone unwrapping toys and remembering “batteries not included” on Christmas day!  Many thanks to Rayovac for these items! 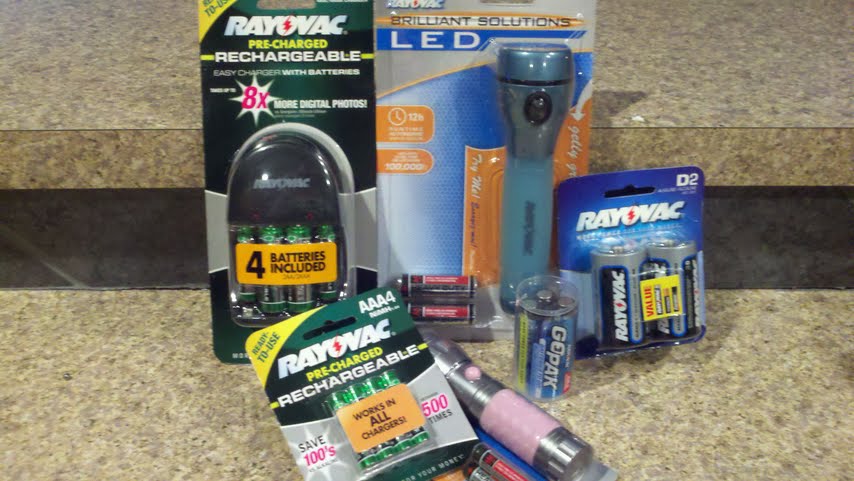 So how do you enter to win these two giveaways? Simple – just comment below to enter. Extra entries may be used by “liking” ZannaLand on facebook, or if you already do – tell your friends! Just comment again to let me know if you are adding another entry. Giveaway ends December 13, 2010 at midnight EST. I’ll use random.org to choose two winners on December 14, so I’ll have enough time to get these shipped out to you before Christmas.

WINNERS have been picked! Check the comments below.

Thanks to everyone who entered!! Happy Holidays!

Ok, so after 3 other days of Disney Gift ideas, I bet you’re thinking, “she couldn’t *possibly* have more great stuff to share!” Well, you’re right. No, I’m kidding. Never fear, there are still some fabulous ideas for the Disney lover in your family!

Friend and fellow Disney blogger Ryan Wilson of the Main Street Gazette brought you this wonderful review of The Crimson Wing and what better gift for a Disney and nature lover? Also check out DisneyNature’s other films Earth and Oceans. Right now at amazon you can save $10 when purchasing two selected DisneyNature titles. It will also prepare you for the upcoming African Cats, set to be released this coming April.

END_OF_DOCUMENT_TOKEN_TO_BE_REPLACED

My family and I were lucky enough to see the trailer for African Cats during our screening of Tangled and I can’t tell you how many “aww’s and oooh’s!” there were coming from the audience in reaction to the beautiful scenes in front of us. 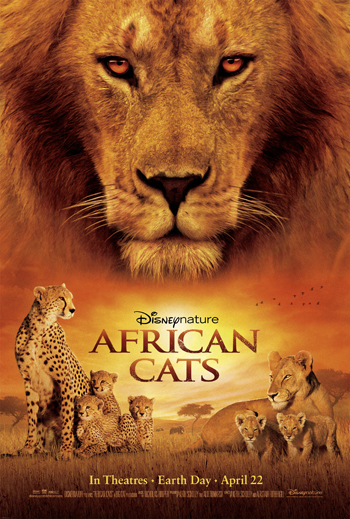 Now DisneyNature is announcing its collaboration with the African Wildlife Foundation (AWF), where a portion of the proceeds from the film’s opening week will be donated to the organization through the Disney Worldwide Conservation Fund. The AWF will be working to protect the Amboseli Wildlife Corridor, a passage between the Amboseli, Tsavo West and Chyulu National Parks, that is frequently used by a variety of wildlife.

Check out the gorgeous trailer: